We are a community consortium working to educate the public, organize workdays, and to mitigate the impact of invasive plant species in the Frankfort – Franklin County region of Kentucky

Join the community initiative working to educate the public, organize workdays, and to mitigate the impact of invasive plant species in Franklin County!  Remove Invasives Partnership (RIP) of Franklin County works to protect our scenic native landscape by removing invasive pest plants and educating and inspiring the public to remove invasive plants.

The Garden Club of Frankfort

*working to get formal approval

If you have questions or would like to discuss this more, please contact Chris Schimmoeller at c.schimmoeller@gmail.com

NOTE: park in the Farmers Market parking lot and meet in the pavilion on the floodwall

Remove Invasives Partnership (RIP) of Franklin County, Frankfort Parks Department, and Bourbon on the Banks will be hosting two work parties to remove invasive plants along the riverbank at the park.

Invasive plants can kill trees and other native vegetation that are critical sources of food and habitat for bees, birds, butterflies, and other beneficial insects. Invasive plants also prevent access and enjoyment of natural surroundings.

Everyone is welcome to join this community effort!  Please wear gloves and appropriate clothing.  You will learn how to identify invasive species and use the best techniques for removal. 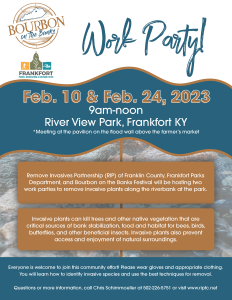 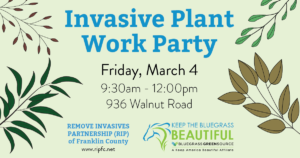 Remove Invasives Partnership (RIP) has a goal of eliminating the sale of invasive plants in Franklin County.  Thank you for volunteering to reach out to local nurseries to encourage them to discontinue the sale of harmful plants and to provide native species as alternatives.

Below you will find information that will help in your conversations.  For more information on how to talk to nurseries, please look at the flyer from a similar initiative at this link:  https://plantright.org/wp-content/uploads/2017/05/PlantRight-CNPS_How-to-Talk-to-Nurseries_2015.pdf

·       Most landowners unknowingly purchase and plant invasive species.
·       Many landowners express regret and frustration when planted species become problematic on their landscapes.
·       Due to survival strategies such as prolific fruit/seed production, wide tolerance of growing conditions, invasive plants escape their original planting site easily and invade other areas, including parks, public spaces, ROWs, and private property.
·       Invasive plants are widely recognized as a threat to natural areas.  Common problems caused by invasive plant infestations include tree death, erosion of creek and riverbanks, reduced tree reproduction, plant suppression, degraded wildlife habitat, loss of aesthetic beauty, impaired use of property.
·       A 2005 study estimated that the economic damages associated with invasive species in the United States reached approximately $120 billion/year (USFWS 2012).  This cost has increased substantially since 2005.
·       Invasive species make land less attractive and less productive while reducing overall property values.
·       Invasive plants have been formally identified by the Kentucky Invasive Pest Council, a nonprofit with membership that includes state and federal agencies and universities.  The board offers a list of plants that pose threats to the Kentucky economy and natural resources. Their complete list can be found at this link:  https://www.se-eppc.org/ky/KYEPPC_2013list.pdf  Here is a list of the top species that we are currently working to eliminate from markets in Franklin County:

RIP (Remove Invasives Partnership) of Franklin County was formed in 2017 to protect the local ecosystem by removing invasive pest plants and educating and inspiring the public to remove invasive plants.   Since then, RIP has conducted 18 workshops involving nearly 200 people that have educated the public while improving East Frankfort Park, Dolly Graham Park, Cove Springs Park, Lakeview Park, Liberty Hall, Melodye Park, and areas in Peaks Mill as well as select private properties.  For questions or more information visit www.ripfc.net or contact Chris Schimmoeller at c.schimmoeller@gmail.com or 502-226-5751.

1.) please let them know if you will attend: info@woodsandwaterstrust.org

“We’ll cut and treating large bush honeysuckle and have a brief training at the beginning depending on who attends. Please spread the word. There’s lots of room to spread out, and everyone should bring a mask. If we have several folks, we’ll split them into groups to make social distancing easier.

If any of you have the ear of landscapers, arborist, parks employees, land managers, etc who professionally use herbicides and chainsaws, this is a weekday, and there’s lot of big plants.”

The City of Frankfort/Parks Department and Remove Invasives Partnership (RIP) are partnering to host two community cleanup days at Dolly Graham Park in south Frankfort, 238 River Street on Friday, September 18 and 25 from 9-noon.  Social distancing and other precautions will be practiced at the events.  In order to participate, preregistration is required.

The cleanup will focus on removing invasive plants, including winter creeper, bush honeysuckle, Japanese honeysuckle, English ivy, monkey grass, and others.  Working in groups of 10, participants will learn to identify and remove pest species.  City crews will be working alongside participants.

Non-native invasive species are choking the riverbank at Dolly Graham, and many of the large trees and native vegetation will not survive if non-native infestations are allowed to proliferate.  Native species help keep the riverbank stable and healthy while providing habitat for birds, pollinators, and other native species.

Dolly Graham is scheduled to receive major renovations in the near future.  These cleanups will help prepare the area and provide important stewardship to the natural areas in the park.

Please wear appropriate clothing.  Gloves will be provided to all participants.

CLEAN your gear before entering & leaving the recreation site.

USE CERTIFIED or local firewood & hay.